Thanks for having me here today, Alice. I’m so excited about Carina Press and all the wonderful books already released, I have to keep on pinching myself to believe that I’m really amongst such brilliant company!


My medieval Scottish Romance is now available from Carina Press.

Amber Jardin has no taste for the bitter feud started before her father’s banishment. But now that he’s passed, she’s had to return to Scotland and his barbaric people. After her bloodthirsty uncle kidnaps one of the family’s rivals, Amber is in turn captured by Krayne Johnstone, the enemy laird. Despite their enmity, their attraction is immediate—and unfortunate, as Amber has sworn to escape.

Will passion and love win out over mistrust and betrayal in time to prevent an all-out war? 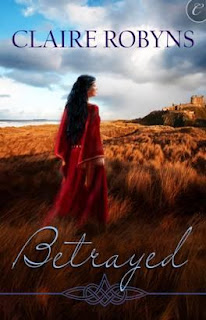 Tell us about your Carina Press release.

Betrayed is a medieval Scottish romance set in the period of the first King James I ~ always confusing because King James VI became King James I of England much later (sorry about the history trivia, I’m addicted)

Krayne Johnstone became laird of Wamphray at the age of 12. He’s a man shaped by the harsh land. His heart is for pumping blood to his sword arm and nothing else. Before he could even start to fall in love with Amber, I had to teach the poor man what love is. But he is honourable and noble, and he has excellent reasons for distrusting scheming women.

Amber Jardin has led a pampered life in England and is totally unprepared for the barbaric realities of Scotland. But she’s not one to simper and bemoan her fate. She’s determined to shape her future and use whatever means on hand to do it. In this case, it’s her body. Amber is not perfect, far from it, but then I’ve never liked my heroines flawless. I don’t necessarily approve of everything she does, but I admire her courage and determination.

I’m fascinated with how books get their start. Do you remember the spark of an idea that grew to become this book?

Strolling through the many castle ruins of England, Scotland and Ireland and devouring the history behind those sites, I quickly became enthralled by the atrocious antics some of the nobility got up to, especially the Scots. And since there’s nothing badder than a bad Scots, and I like bad boys, I really loved the idea of writing a romance steeped in the mayhem of medieval Scotland.

What kinds of stories do you like to read and write?

I read pretty much everything. The most important thing to me is really living the story with the characters. If an author can achieve that inside my head while I read, I don’t really mind what the genre. Having said that, I’m naturally drawn to romantic comedy and historical romance so this is what I write. I also absolutely love romantic suspense and would give my eye-teeth to be able to write it, but I’m terrible at keeping secrets and would never last until the end before giving away the bad guys.

Tell us a bit about yourself. Family, house, pets, hobbies, that sort of thing.

I grew up in South Africa and met my British husband out there. Ever since, we seem to be playing hopscotch between South Africa and England, but cross fingers, we’ve been in the UK for about 5 years now and my darling husband hasn’t mentioned dragging us back to SA for a while now. We have 10 year old twin boys who are just starting to act like angsty teenagers, so I’m hoping they get it all out of their system before they actually do become teenagers.

What kind of music do you like? Do you listen to music while writing?

Okay, now I’m going to give away my age  My favourite artists are Queen, U2, Lilly Allen and The Killers. I’ve tried writing to music, but it distracts me too much. I end up singing along and going into some sort of daydream instead of writing.

Who do you think is the sexiest man on Earth? What makes him sexy?

Ooh, can I choose two? Russell Crowe because he just has that right combination of rugged looks that isn’t actually good-looking, but more sort of lived-in hunky features. As to his personality, not sure I’d actually like him very much, but then I don’t have to live with him, I just have to gaze at him in adoration.

And my second would be Keanu Reeves. Totally opposite Crowe, but there’s something darkly mysterious about Keanu that fascinates me. Once again, not sure I’d like the guy in person very much.

Hmm, wonder what that says about me?

If you’d like to read a little more about Betrayed, you can read the excerpt at
http://www.clairerobyns.com/Betrayed.html

You can visit with Claire Robyns at

Thanks again for allowing me to invade your blog today, Alice
Posted by Alice Gaines at 12:01 AM 4 comments: