Guest blogger, Em Petrova: A Banana is Not Just a Banana 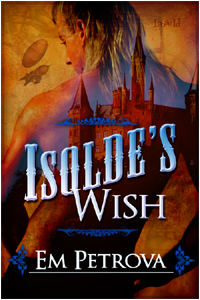 By Em Petrova
Most of us have seen those annoying ads while surfing the web or Facebook that say if you never eat a banana, you’ll lose belly fat. Well, I’m here to tell you if eat a banana, you’ll increase your sex drive. Yep! No lie. Bananas are rich in potassium and B vitamins—necessities for sex hormone production—and its phallic shape has long been the reason it’s an aphrodisiac food. The encyclopedia states that an aphrodisiac is anything that “arouses sexual excitement.” Keep reading to learn ways to use foods to excite your lover, and then make your shopping list in preparation for a fun evening!

Aphrodisiacs were first sought out as a remedy for sexual anxieties. Fears of inadequate performance and the need to increase fertility drove people to search for ways to insure male and female potency. In olden times, food wasn’t as readily available as it is today, so nutrition factored into loss of libido and reduction in fertility rates. Substances that represent seed or semen such as bulbs, eggs or snails were heralded to have sexual powers. And foods that had a physical resemblance to genitalia were considered stimulating. Hmm. I’m thinking of a few, are you?

Other aphrodisiac foods started in Greek mythology. Aphrodite, the love goddess considered sparrows to have an “amorous nature” and therefore used them in aphrodisiac brews. (I’m envisioning little feathers sticking out of people’s mouths, are you?) The ancient list of aphrodisiac foods includes anise, basil, carrot, salvia, pistachio nuts, sage, sea fennel, turnips and orchid bulbs amongst many others. Here are a few from the modern lists.

Almond: A fertility symbol throughout time. The aroma is thought to induce female passions. So guys should slather themselves in almond oil and then serve Marzipan (almond paste) in the shape of a fig leaf as a dessert.

Aniseed: Has been an aphrodisiac since the Greeks and Romans believed it had special powers. Sucking on the seeds is said to increase your desire. Is that why my Italian grandmother used to sprinkle the seeds onto her tongue? Okay, that will give me nightmares later. 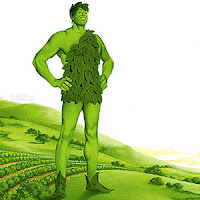 Asparagus: Is often enjoyed for its phallic shape. This gives new meaning to the words Jolly Green Giant. Feed your lover steamed spears for three days for the most powerful effect. Or just say hell with it, feed it to your pet rabbit, and then do it like bunnies.

Chocolate: Ohhh, here is one we women can get into, right? The Aztecs referred to chocolate as “nourishment of the gods.” It contains an antioxidant similar to red wine. The secret is to combine the two. A glass of Cabernet with a bit of dark chocolate is a sensuous treat for you and your mate.

Carrots: The phallus-shaped carrot has been believed to stimulate the male since ancient times. It was used in the Middle Eastern royalty to aid seduction. If you’re using it, guys, we like ‘em thick.

Coffee: Small amounts of rich dark coffee in little cups will stimulate both the mind and body. Good for those all-nighters.

Ginger: Raw, cooked or crystallized ginger root is a stimulant to the circulatory system. Try it in a stir-fry and stir up some passions in the bedroom later.

Honey: Medieval lovers plied their partners with Mead, a fermented drink made from honey. Newlyweds drank it on their wedding nights. But I bet you can come up with some better uses for honey than fermenting it. Like drizzling it on flesh.

Pineapple: It’s rich in vitamin C and used homeopathically for impotence. Add it to enough rum and you’ll be dancing in the sheets.

Vanilla: Old lore states that “the young daughter of the Mexican fertility goddess loved a Totonac youth. Unable to marry him due to her divine nature, she transformed herself into a plant that would provide pleasure and happiness.” I wouldn’t suggest transforming yourself to a vanilla plant to sate your lover, but the scent and flavor of vanilla is believed to increase lust. Use some vanilla lotion on your partner for a delicious massage, or drop a vanilla bean into a glass of champagne to heat things up.

Next time you’re feeling a lull in the bedroom, try some of these aphrodisiac foods to spur new passions. As a writer, I know my characters will employ a few in the future. Now how many uses can I come up with for the banana?

With a wild boar on her heels and a naked man before her, Princess Isolde has no clue which danger is greater. When she trips and falls into the dirt at the feet of the axe-wielding warrior, giving her a very close encounter with his manhood, she battles her undeniable awareness of the sculpted man even after she finds he has a price on his head for attempting to assassinate her father, King Adlard.

The bold son of the man executed for sleeping with the king’s wife, Sadler attempted to avenge his father at a very young age. Now he’s faced with the temptation of King Adlard’s daughter and presented a fresh opportunity to right his failed assassination attempt.

But when he learns a powerful earl seeks the princess’s hand in marriage, Sadler realizes his passions run deep. Desperate to keep her from the arms of his enemy, he plans to steal her away from the kingdom and make her his own.

What the hell had she been thinking to run toward the loch? The cold mist seared Isolde’s lungs, and a bloody cry welled on her tongue, prepared to lick outward at the first sound of the demon creature on her heels. Her silk slippers dug into the soft earth with a squelching noise not unlike the beat of hooves. She strained to hear its movements in the wild tangle of underbrush. It circled her, herding her almost.

Nay. Best not to think of such things. Isolde had the upper hand. She could outthink any man in the castle. Certainly she could outwit this pig. Except the pig wasn’t wearing ten pounds of fabric.

Still, the voice in the back of her head told her it was lunacy to run toward the loch. What would happen when she reached the water’s edge? She couldn’t swim a stroke, and in this damned confining brocade gown, she’d sink like a stone.

Behind her she heard the drum of hooves in the thick foliage. Adrenaline shot through her veins, propelling her legs faster. Branches lashed at her face and plucked at her gown. Her fingers cramped from holding up her heavy skirts, and the high grasses stung her bare calves. The pines gave way to leafier trees, and soon she would break through the deep woods and onto the shores of the loch.

The beast closed in on her, grunting and gasping in a way that made her think of the men sawing logs for the castle’s new android horse paddock. These mechanical horses needed good, strong fencing that could keep their heavy metal bodies from escaping during a stampede, which frequently happened when they were frightened.

A flash of bristly black hair flickered in the corner of her eye, and she veered sharply left, away from it. The scream was poised on her lips now, ready to be released into the empty woods. Even her strongest bloodcurdling scream would bring no one. She was too far from the castle for even the field workers to hear.

And that beast had tusks like spears on it. She’d be killed for sure, even if she didn’t drown first trying to escape. Could pigs swim?

Back and forth she zigzagged through the woods, thigh muscles burning and forearms tense from holding the weight of her skirts. She fought to remain upright as she forged a path through the web of tree roots. Her throat was clogged with fear.

With a shriek that raised the hair on her neck, the wild boar rushed her. Its meaty body struck the backs of her legs. She pitched forward, releasing her skirts to instinctively catch herself and nearly breaking her neck as she tripped over the mass of spun-gold fabric.

Righting herself, she continued to bolt toward the loch, knowing no other course now, but hoping someone had left a mist boat moored there. The mist on the loch was thick enough to power a lightweight boat halfway around the perimeter of the country. If she could only reach a boat, she’d fire up the engine and race to the middle of the loch, far from the beast pursuing her.

The thunder of hooves bore down upon her. She lunged through a wall of vines, tripping and wheeling, blinded by greenery, branches scratching her face, heels over head, only to fall at the feet of a naked man.
Buy Link: http://www.loose-id.com/Isoldes-Wish.aspx
Posted by Alice Gaines at 5:00 AM 9 comments:

Changeling Press has just released a bunch of my older stories in one volume at a lower price than if you had to buy them all individually.  The original Adventures of Wonderslut appears in here.

Demons R Us: When a mysterious book of spells drops into Vicky’s lap, she decides to summon a demon to evict her soon-to-be-ex -- and his girlfriend. Asmodai and Ilbris don’t want her soul in exchange for their help. They want her body.


Eria’s Ménage: On the distant planet Heriad, Queen Eria, needs an heir. A daughter conceived in the royal manner. Suitors from around the galaxy have assembled. Tad and Brath have a plan of their own… and it’s not a temporary arrangement.

Fairy in My Bed: Steve can’t believe who, or what, has let herself in through the cat door. She’s twelve inches tall and claims to be a fairy. His third wish takes them both by surprise!

Sexation: Carly Osborn’s found just what every flagging marriage needs -- a little green man on a sex vacation to Earth! But when It the Twenty-third’s vacation comes to an end, will they be able to convince him to stay?

Adventures of Wonderslut: Mild-mannered orchid grower Felicity Plumswindle has a secret identity -- Wonderslut, Avenger of the Non-Orgasmic. She travels the country rewarding caring lovers and punishing insensitive ones. Not only are the government morality police hot on her tail, but she’s also feeling the need for a hero of her own…
Posted by Alice Gaines at 10:27 AM No comments: