Read an excerpt from Built for Lust

From Built for Lust by Alice Gaines

The sky was just beginning to lighten along the horizon as she let them out of the building and headed with Gray across the parking lot to the woods beyond. Beneath the trees, the night still reigned. In near total darkness, she kicked out of her shoes and undressed. Gray watched the entire time, his eyes pricks of light that seemed to shine from inside him. She hadn’t built anything within him that should do that, but eventually he’d become more than the sum of his parts. After he’d experienced the world, he’d become his own creature, only subservient to her. Maybe he’d started the process already.

He let out a little whine. Impatience? Disappointment at her human shape? Or maybe, excitement.

She shifted slowly so he could watch. Truth be told, she hadn’t spent much time in her wolven form lately, and the change took some thought. Her body became smaller but more powerful than her human shape. Immediately, her heightened hearing and scent told her what she needed to know about her surroundings. No other humans nearby and no other wolves. Only the sounds of birds stirring and the scent of her mate.

He walked toward her, his head held down. The posture might have been submission but more likely caution. He’d never seen one of his own kind before, and he must have detected her perfume the way she had his.

She held absolutely still, letting him come near. A low rumble from his chest warned that he knew he had the advantage of size and strength. What he didn’t know, though, was that she had more cunning. If she didn’t want him, he wouldn’t have her.

She’d built him for this, though, and if he did things the way she’d programmed, he’d have her before the sun came fully up.

Now near her, he sniffed along her flank, close to her sex. Her musk filled the air around her as the hunger built inside her. When he walked behind her, her legs trembled. For the first time in her life, she was only moments away from her body’s ultimate fulfillment, but if she’d made even one serious mistake in his programming, she’d still go uncompleted.

He pressed his snout in the space between her legs, his breath hot on the sensitive flesh. She jumped at the shock, and her voice came out as a yip of surprise, and her whole body quaked. Yes. Oh, yes!

He could continue now, but the full mating ritual demanded the chase. Now that he’d scented her, he’d follow -- at top speed until he dropped. He had her in his blood.

She bounded away from him. Not far, just enough to let him know he hadn’t won her yet. He stared back at her, silver fury in his eyes. When he stepped in her direction, she leapt again, now well out of his reach unless he agreed to come after her with everything he had. Staring back at him evenly, she waited for some sign that he’d made his decision. After a moment, he crouched. Only a creature perfectly attuned to him could have caught the change in his posture, he did it so subtly. She couldn’t miss the coiled strength, so before he could leap and take her where she stood, she raced off into the underbrush, dashing between ferns that came up to her haunches.

She’d run at full speed before, but never when the heat was fully on her. Her brain tuned out all but the most basic thoughts -- the driving rhythm of her footfalls as she extended her forelegs and then pulled at the ground beneath them, the power of her hind legs pushing her forward. The sound of her breathing and the pounding of her heart. Most of all the tension building in her womb with each jarring motion as her paws hit solid dirt.

Every inch of her sensed the male behind her. Now, he had to find his footing and chase the scent she’d left behind. Soon, he’d have his balance and would hit full speed. She’d need to make evasive movements to make him earn his reward.

Crashing from behind her told her he’d found his stride. When the sound of his breathing came through, too, she stopped abruptly, zigged, and dashed behind a tree. While she headed off in a new direction he came to a stop, hesitated, and then went after her. Those few seconds gave her another lead, and she used it to head down a ravine, skidding much of the way. At the bottom, she leapt from stone to stone across the stream, and went up the other bank.

Closer now, he splashed behind her and grunted as he closed the distance on the upward slope. He’d have her in a moment, and the glorious chase would end. She’d fought surrender all her life, but this time she’d lose. It was almost a shame that she could power down this beast she’d created, but she could bring him to life again whenever she wanted. She owned him, not the other way around.

Just when she couldn’t outrun him any longer, she found another escape. A downed tree, close enough to the ground that she could just fit beneath it, but he’d be too big to follow. She scrambled under it, the bark digging into her back. He’d just managed to nip at her heel, but she pulled her foot away, flattened herself against the ground and watched him.

Growling, he paced the ground in front of the log, while her heart hammered in her chest. His flanks heaved from exertion as he prowled, back and forth, back and forth. What a magnificent animal -- as much and more as her fantasies. Her womb clenched as she caught the scent of his desire. Both of them at fever pitch now, they only needed to conclude the final act of this mating.

She retreated on her belly, turned, and dashed out from under the other side of the tree. Without looking back, she headed at full speed ahead of her. Her perfect sense of him told her he’d bounded over the log in one motion and was bearing down on her. Fine. The time had come.

With her last burst of speed, she cleared some trees and sprinted into a clearing. A meadow of sorts, soft grass springing under her paws. She still ran with everything in her, but not to evade him any longer. With each stride, her excitement mounted. Just a little farther, a few more strides. Make him wild with need so he’d take her hard and fast. Now, now.

With a snarl, he launched himself on top of her, knocking the wind out of her. For a while, they rolled together, limbs tangled, teeth nipping. He ended up on top, nearly smothering her, as he bit down into the fur and flesh at the back of her neck. No more running. Now, he’d put all that ferocity into making her his.

Acknowledging her master, she pushed herself up to offer him her hindquarters.

Built for Lust is one of four stories in the collection released from Changeling Press today.

http://changelingpress.com/product.php?&upt=book&ubid=2175
Posted by Alice Gaines at 11:49 AM No comments:

New review for my short story, Sex After Death

Thank you, Long and Short Reviews 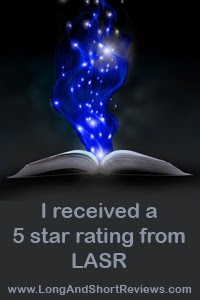 
What surprised me the most about this tale was how often it made me laugh. The author introduces Katy to such unexpected situations that her reactions to them are as humorous as they are well-suited for the tone of this piece. Sometimes arousal and laughter go well together. This is one of them.

Sex After Death is one of the best short stories I’ve read in 2013. I can’t recommend it highly enough to anyone who loves quirky, funny erotica.
Posted by Alice Gaines at 2:40 PM No comments: