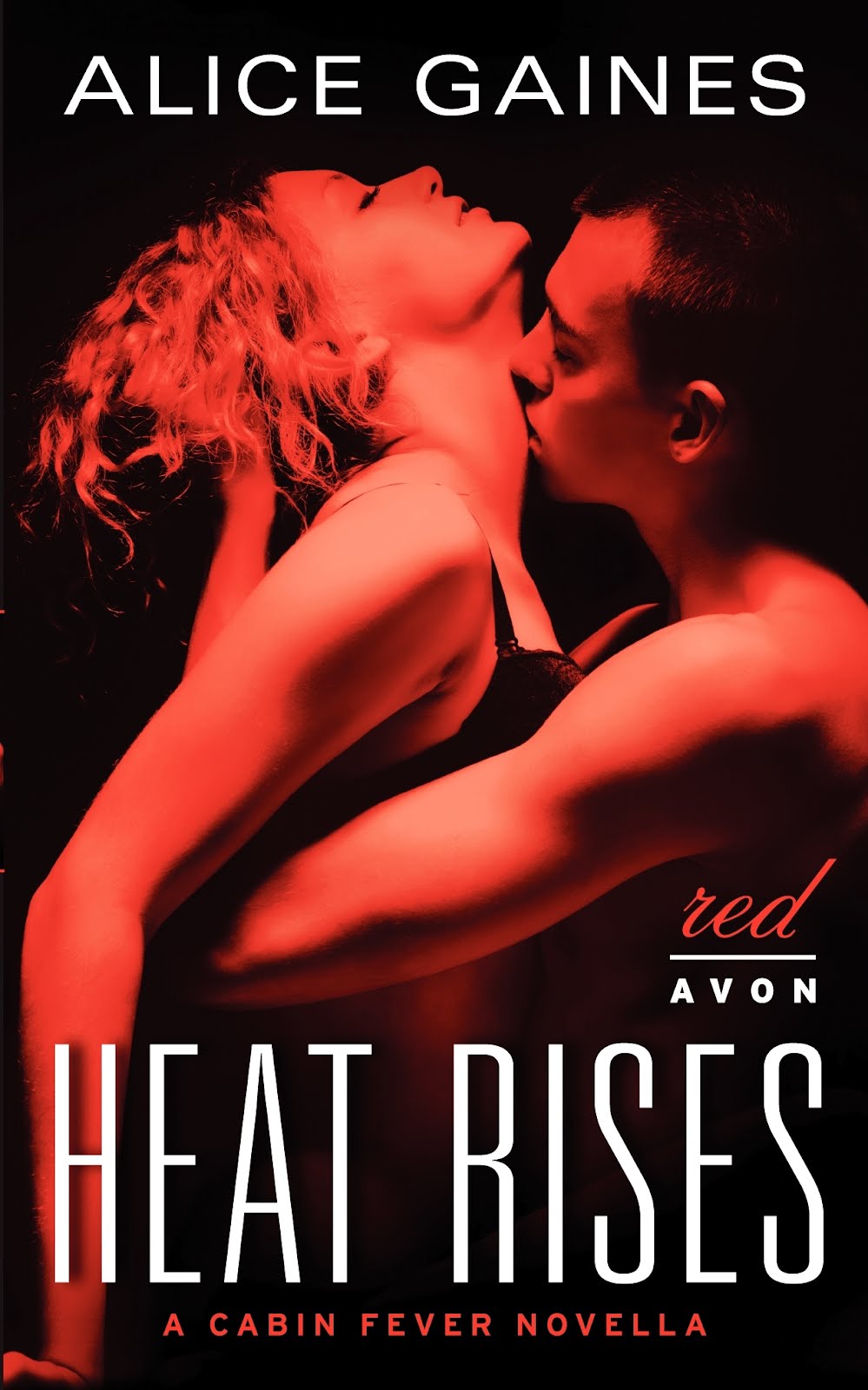 My Cabin Fever novella, Heat Rises, is a Top Book of 2013 at Google.

Snowbound in a cabin….a chance to live out all her fantasies

Laura Barber has dreamt of doing unspeakable things with Ethan Gould for years. Now, stuck in a mountain cabin, she just might get her shot. Ethan offers her the chance to live out each and every one of those desires. They may be rivals in the business world, but in the bedroom they’re a perfect match. Knowing they only have a few days, Laura shakes off all her inhibitions--every secret need, every lust-filled thought…it’s all fair game.

Asleep. Dreaming. Someone was telling her to move over. The salesman in her mind’s eye who was trying to sell her the huge purple SUV with the tiny tires. Why would he want her to move over?

She opened her eyes to a strange place with a low ceiling just visible above her. The loft. The cabin. A hand shook her arm.

She clutched the covers to her chest and turned. The floorboard lighting cast enough illumination to show to his face at the top of the ladder, less than a foot from hers. “What happened?”

“The fire went out.”

“You should have kept it going.”

“I was asleep, okay?” He climbed the last few rungs and lifted the covers so he could slide in beside her.

“What are you doing?”

“This is the only warm spot in the cabin.”

She retreated toward the back of the loft, but that didn’t take her very far away from him. “The wood stove.”

“It sends all the warmth up here,” he said. “Heat rises, remember?”

“But you can’t—” Before she could get another word out, he pressed his foot against her leg. Even through her pajamas, it felt like ice.

“Heaven forbid.” He had a glorious ass, just like every other part of him. Not that she’d ever stared at it or anything.

“Thanks.” He pulled the covers up under his chin and settled back. At least, they had two pillows so they wouldn’t have to share. But how was she supposed to sleep with him taking up all this room with his scent and his, well, maleness? Maybe a little small talk would make things less tense.

“That was a great dinner. You’re a good cook,” she said.

“But zabaglione? That takes some skill.”

He shrugged, his shoulder brushing hers. “Glad we found the marsala. Jeff keeps a stocked liquor cabinet.”

“Maybe I’ll make you a margarita while we’re here.”

“Laura, I . . .” He rolled toward her and something very solid pressed against her hip. Hard, male, and very large. He flopped onto his back again, and they lay in silence for a while.

“I guess you must have felt—” he said.

“Don’t be. It’s a natural male reaction,” she said. Natural and about as awkward as anything natural could be. “Men get, well, that way all the time, don’t they? At least, that’s what I’ve heard.”

Oh God, here they went again. The two of them together were some kind catastrophe waiting to happen.

“Are you kidding?” he asked. “You think this is some kind of random, meaningless event?”

“I think I don’t want to have to talk about another elephant in six years.” She rolled over, pinning herself against the wall with her back to him. “Good night, Ethan.”

“Oh no you don’t.” He caught her shoulder and pulled her back against the mattress. “We’re going to take care of this right now.”

“For heaven’s sake, there’s nothing to take care of.”

“I don’t know anything about anatomy. I was a business major.”

“Gee . . . hosophat.” He propped himself up on one elbow and waved his finger under her nose. For a moment, he looked ready to deliver a lecture, but then, his expression change, turning serious, and he stared at her mouth.

All the air whooshed out of the tiny space, and she parted her lips to try to breathe. As soon as she had, he moaned and closed the distance to place his lips over hers.

Posted by Alice Gaines at 9:45 AM No comments: