You know it's going to be a good day when you get to church early and the choir is rehearsing the Hallelujah Chorus. That happened last Sunday, and it put a spring in my step and a bubble of joy in the general vicinity of my heart. The feeling reinforced something I've been thinking for some time...that a great church is a truly sensual experience.

I'll leave aside the sense of taste because in the service itself we only consume the wafers and wine.  The wine isn't going to win any awards, and the wafers?  All I can say is that we in the altar guild sometimes end up eating large numbers of left-overs because they're blessed and can't be thrown in the garbage.  Choking those things down ain't easy.  As one of us once remarked, we could use some blessed onion dip.

My church is a huge, brick building.  It's old by California standards, built in 1912.  (Stop snickering, east coasters.)  You walk in, and the beauty wows you.  I'm not kidding here.  I brought a friend of another faith one morning, and she gasped audibly.  "It's so beautiful."  The vaulted ceilings and huge stained glass windows in front and back tell you you're in a special space.  There's one side window that's mostly blue panes.  When the sun hits it, the light courses in toward the altar in what can only be called a heavenly glow.

What you don't expect, though, is the scent of St. Paul's.  In almost 100 California winters, some seepage has occurred in the brick walls.  The result is a pleasant musty perfume that my friend insisted smelled like a wine cellar.  A parishioner told the rector that "it smells like church."  One of my favorite things in the world is to sit all alone in the church and breathe deeply.

For the sense of touch...well, we're a huggy church.  Our rector gives the best hugs.  He's a tall, handsome man with a laugh you can hear from a block away...literally.  But we all hug and touch.  Sometimes we do it because we're so darned happy to be in that place with each other.  During the peace, we all ooze out of the pews and walk up and down wishing each other "the peace of the Lord" and shaking hands.  Visitors often think we're weird, but we wish them peace and shake hands with them, too.

The true feast for the senses comes from the music at St. Paul's.  Our organ dates to 1934.  When it's really snarling, it can rock even our huge space.  That may be an exaggeration, but it certainly feels that way.  Add our amazing choir, and you have a truly joyful noise.  We have soloists who ought to be gracing opera stages.  (You guys know who you are.)

I hear the doubters saying, "Yeah, yeah, Alice, but I can hear Messiah in a concert hall."  To which, I say, "Not like this."  While you're sitting up in the rafters with opera glasses, I'm sitting in pew #3 with the music right in front of me or next to me as the choir processes in or out.  Besides, these are my friends making this glorious sound.  They're singing for me.  I can go up to them and hug them afterward. 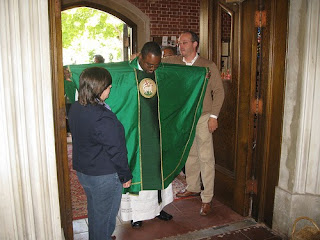 What's even more remarkable is, for parts of the service, I'm not only allowed but encouraged to sign along.  Sure, the congregation (sadly including me) makes a mess of some of the more difficult parts, but it's an work of love.

Which brings me back to the Hallelujah Chorus.  It was supposed to be a choir effort, but everyone pretty much sang the parts they knew, including the rector, standing behind the altar.  If that isn't enough to send your spirit toward heaven, you're a harder nut that I am.  I have to admit that my eyes filled with tears.  It was so d*mn*d beautiful.
Posted by Alice Gaines at 1:16 PM 2 comments: