New release - Earth Con: Jazzed Up - and a raffle!

Zara represents the force of life and love through sex. Origin has sent her into the universe to battle her counterpart, an escaped spirit who brings enslavement and death. She's followed Raven to Earth Con to save humans from Raven's evil. What she doesn't expect to discover is a human with the power of Origin strong inside him.


Nolan Price lost his sister to a cult, and since then he's devoted himself to freeing other victims. He never thought to encounter a charismatic leader from another part of the universe. Nor did he understand the depths of his own strength.

Raven was here. She could almost smell him. As Zara circulated amid the crowd, normal Earthers all despite their colorful costumes, she kept all her senses alert for signs of Raven’s presence. Even if she hadn’t embedded the tracer into the bulkhead of his ship, she would have traveled to Earth Con. Gullible in the extreme, the inhabitants of this planet would make perfect fodder for Raven, especially since this convention allowed beings from other worlds to mix in with the locals. He must have been salivating as he entered this solar system and set down outside the city limits.

“Hey, cutie, what are you supposed to be?” a human male said as he sidled up to her.

“Origin,” she answered. A truthful answer that would mean nothing to him.

Humans would have this reaction to her, and she’d have to get used to it. After all, she was here to seduce them as much as Raven was. Unlike Raven, she’d also come to help. Raven had his own motivations, none of them for the Earthers’ benefit.

“Are you going to the concert later?” he asked.

“Is it something special?”

“I’ll say.” He laughed, deep in his throat and with definite overtones. “I’m not normally a fan of jazz, but this new guy does a special kind of fusion, ya know?”

That would describe Raven’s music. Fusion of melody and death. Something exotic to lure his victims in and then seduce them with promises of eternal pleasure. Then he’d steal the energy of their souls, and they’d never realize what had happened to them.

Zara stopped in her tracks and finally took the time to study the Earther. Tall by human standards, although he only topped her by an inch or so. He had light brown hair, and he’d painted his face green and added fake wrinkles to his forehead. If she’d had more time to study human lore, she might have figured out what sort of creature he was supposed to represent.

He lacked the dazed look -- the empty expression -- of someone Raven had already jazzed-up. Neither did he possess the powerful sexuality Raven would endow in his Second-in-Combat. So he most likely wouldn’t have encountered Raven in person. Yet.

“And the concert… who’s performing?” she asked.

“A serious new dude. Has a wicked way with a guitar.”

The Earther stared at her for a few seconds as if he hadn’t considered the possibility before. “Yeah, he does.”

Origins appeared human enough, although their greater height, black hair, and pale skin made them stand out in a crowd. Raven had all of that in spades as well as an ethereal beauty that drew anyone in -- Origin or Earther.

“I would like to attend this concert,” she said.

That appeared to surprise him because his eyes widened. “You would?”

“I’ve never heard of this musician. What do you know about him?”

“Well, he looks like you, as you said. People say he plays like no one else they’ve ever heard,” the Earther said. “Everyone’s excited.”

“Well then… what’s your name?”

“Zara.” She might as well give him her real name. It wouldn’t mean anything to him. In Origin, Zara would be recognized as the goddess of sex and life as opposed to Raven, the god of sex and death. She’d won the battle for the souls of Origins for the most part, which had sent Raven to other worlds to recruit. The Earthers here had no idea they were to become part of an ancient battle. 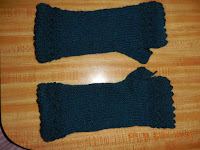 To celebrate, I'll be raffling off this pair of wrist warmers so someone on my mailing list.  You can join on the right.
Posted by Alice Gaines at 4:48 AM No comments: