Now out from Changeling Press!  Aisle 6

Trish is doing her usual thing -- checking out the hot guy she calls The Bod at the supermarket -- when she discovers a weird anomaly in aisle 6. When she gets too close, she finds herself transported to another time and place, and The Bod is waiting for her, dressed as a desert sheik. Anders wants to help Trish work out her sexual fantasies. On the fun scale, it sure beats her job in the IT department.

Anders has been tasked to save his species by mating with a woman from a different version of Earth. Trish is his most compatible DNA match. He must keep her with him by any means possible and give her as much sex as she can stand. But will his deception force them apart?
Cleanup on Aisle 6!

And on December 20, I'll be raffling off this cowl to someone on my newsletter list.  Sign up at right. 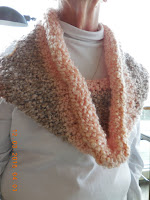 That cute guy was back at the supermarket again. Trish Swanson had watched him for weeks now. Setting out melons and handling tomatoes gently -- like a lover. Most of all climbing to reach something on the top shelf for tiny Mrs. Gilmore. Despite her seventy-odd years, Mrs. G's eyes sparkled whenever he did it. In fact, the old lady was probably putting him up to it and didn't really need the generic, canned dog food up there. As far as Trish knew, she didn't even have a dog. But when he stretched out to his full height, the muscles in his shoulders bunched and released, and he gave anyone watching a good look at a major-league ass. After a while, Trish and Mrs. Gilmore had coordinated their shopping schedules with his shifts so they could both enjoy the view at least once a week.

Today, Mrs. G hadn't shown up, and Trish remained at her station in the pet food aisle. She'd spotted The Bod, as Trish had come to think of him, in the produce section. He'd probably mosey over this way in a minute or two, and if the old lady didn't show up, Trish would either have to confront him herself or wait until next Wednesday for another ogling session.
He rounded the end of the aisle and headed in her direction.

Immediately, her mouth went dry, and her heartbeat started an erratic pitter-pat. She'd always been a complete dunce around good-looking men. Hell, all men. If she were to try to speak to this one, she'd probably stutter and blurt out something that said nothing more than "I'm an idiot."

He had the bluest eyes she'd ever seen. Not light blue like robin's eggs but more the hue of a cloudless, California sky. Deep, dark, and dangerous. His chestnut hair and pale skin made him stare-worthy, but his most remarkable feature had to be the dimples that appeared at the corners of his mouth when he smiled. And he always smiled. He was doing it right now.

"Hello," he said. One simple, very ordinary word. But it had a lilt to it. Almost an accent, as if English wasn't his first language. He was Latino, maybe. Or Irish. French?

Whatever the origin of his speech, it drove any response right out of her head. She opened her mouth to speak, but nothing came out, so she lifted her hand and wiggled her fingers. God, what a moron. Why did she have to be so damned shy?

"Where's your friend?" he said.

"Hmm?" Still stupid, but at least she'd said something.

"The older lady. I assumed you must drive her here," he said. "I always see you together."

He laughed. "I don't drive her here."

"Of course, you don't. I just meant..." Anything she'd meant would make her sound even more foolish than she already did. She surely hadn't wanted to suggest that he and Mrs. G knew each other from somewhere else or staged their performances for her benefit. If she didn't have anything intelligent to say, she'd keep her mouth shut. So she did exactly that.

He rested an elbow on a shelf and struck a casual pose. Not going anywhere for a while, obviously. His posture only emphasized his considerable height and the breadth of his shoulders. He could hardly have shown himself off to better effect except maybe by bending over. Where was Mrs. G when Trish needed her?

"Can I help you with something?" he asked. His voice had taken on a husky tone... the kind you heard in the bedroom after particularly good sex. Not that she'd shared those delightful moments with too many men, but you didn't have to experience that often to have the sensations imprinted in your brain. The dimples in his cheeks and the light in his eyes told her he knew exactly what message he was conveying to her. He had to be supremely confident that she'd be receptive. Luckily for both of them, he'd calculated correctly.

"Help?" she said. There, that came off as casual. More or less.

"You appear to be searching for something. I'm here to make sure you find it."

"Well, since you asked..." What could she make him search for? Dog food upper shelf? Cat litter lower? Mrs. Gilmore always knew how to get him to show off his build to best effect.

"You do?" Well now, that could be embarrassing. He'd figured out their little game? Drat. Could he sue them for sexual harassment?

Posted by Alice Gaines at 9:36 AM No comments: