Prepare to see Lucifer in a whole new way.  He brings new meaning to "sexy devil." 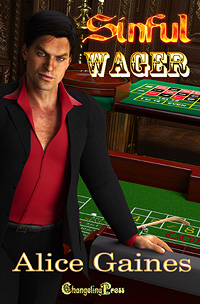 How about this fabulous cover by the divine Angela Knight?

Marty Davis takes a wrong turn in the casino called Pleasure Palace and winds up in a place where the machines pay off with hot sex and everyone wins. Turns out she's in hell, and Lucifer is the sexiest guy there. With all that going for the underworld, who'd want to go back to reality? She makes a deal with him -- if she can make him beg for the privilege of giving her an orgasm, she gets to stay on as his partner.

Lucifer doesn't need a partner, but this woman gets his libido hot and bothered, something that hasn't happened for longer than he cares to remember. Besides, her ideas for running the casino have the place humming. He takes her challenge and finds, to his chagrin, that he can't seem to win.

Modern casino chips sure didn't make the satisfying clatter silver dollars used to. That didn't keep Marty Davis from ruffling her thumb upward along the pile in front of her on the bar. Thapthapthapthapthap over and over again until she couldn't stomach the sound any longer, so she spread them out in a precise line and scooped them up again.


Tim's hand came across the bar and down on hers. "Are you doing that to irritate me or yourself?"

She considered the question. The house wine they served in the casino sucked. The local beer was swill. The best bartender in all of Las Vegas, Tim could make eight-layer frappe things out of various liqueurs so sweet they'd give you cavities. None of that held any appeal.

"Mix me something strong enough that I'll go jump some guy's bones," she said finally.

Tim smiled and leaned over the bar toward her. "My bones are always available."

Indeed they were, as he made obvious at every opportunity. She'd normally take full advantage of such a thorough and considerate lover, but Tim had become too attached, and she'd had to break things off before he got hurt. He deserved kids and a picket fence, not a woman who bored as easily as she did.

Instead of waiting for her to make up her mind, Tim took the bottle of good Scotch from the shelf behind him and poured a generous amount into a tumbler. He set that and a cocktail napkin in front of her. "On me."

"Thanks." She lifted the glass in a toast and then sipped at the smooth liquor. Tim couldn't afford much of this stuff on his salary, and she normally wouldn't accept it from him, but she couldn't keep rejecting everything he offered.

"Pretty much. I only had to call security on one rowdy drunk."

"What about him?" she said, nodding in the direction of a man sitting at the end of the bar. The guy wore a suit a bit too big for him and sat with his head in his hands, his fingers stuck into his fringe of hair. "Shouldn't you be getting him a cab?"

Marty pushed the pile of chips toward Tim. "Give him these."

"I have more on this," she said, holding up the card the last slot had coughed out after she'd won a jackpot.

Tim picked up the chips and headed toward the man with the bad clothes and the worse expression. She didn't catch much of the conversation, but the guy perked right up, lifting his head out of his hands and smoothing his hair into place. After giving her a thumbs-up, he climbed off his stool and disappeared into the crowd around one of the craps tables. That might have lifted her spirits if she hadn't known he'd piss all the money away again. By the time he did, she'd be gone from here one way or another.

Tim returned. "You made his day."

"I give him an hour before he's back and broke again."

Tim studied her for a moment. "You're really down, aren't you?"

Empty was more like it. A nice, long, miserable crying jag would feel pretty good, but she had no real reason for sadness.

"Things come too easy lately," she went on. "I landed the biggest account at the agency without even trying. I keep winning here, no matter what I play."

"Every man in the place has the hots for you," Tim said.

She wouldn't have brought up the subject and rubbed Tim's nose in it, but she'd had lots of opportunities in that department, too. She'd had enough lovers in the last month to fill an anthology of really naughty stories. Not a disappointment among them. The ones without huge endowments had all had skillful fingers and tongues. Others could go all night. An embarrassment of riches. All that ought to make her happy.

She snapped back to reality. "I beg your pardon?" "The Faust story," he said. "You're living it."

"That's right. You're the literature major."

"That and bartender school got me this glamorous job." He extended his arms, gesturing around him.

"Tell me more about this Faust thing."

"Faust was a man, not a thing." Tim grabbed his cloth and wiped the top of the bar the way he always did when he either told a story or listened to one. "He had everything he could possibly want, but nothing gave him any pleasure."

"That pretty much describes me," she said. "What did he do?"

"The devil offered him a bargain. If Satan could show him something so beautiful he'd want to hold onto it, Faust would have to surrender his soul."

"How did the story come out?" she asked.

"Depends on whose version you're reading," Tim answered.

"I'm not likely to find anything so interesting as Satan here."

"The Pleasure Palace is a pretty big place. Are you sure you've explored every corner of it?" Tim asked.

"Enough corners." Tim had a point, though. The hotel/casino complex was one of Vegas's newest, biggest, and most luxurious, but it had the added cachet of having been built on the foundation of several older gambling houses. An intricate web of corridors went off in all directions beneath the massive building, ending abruptly in some cases. Rumors had circulated during construction about things workers had found in basements. All hype, no doubt, but few people could claim they had actually seen every square foot of the place. Lots of tourists came here specifically to explore, and none ever complained of being disappointed.

"You know I'm right, don't you?" Tim said. "Where are you going to find the devil if not in Las Vegas and where in Las Vegas if not here?"

"What the heck? It's too early to go home, anyway." She got off her barstool and picked up the ridiculously expensive Scotch. After downing it, she leaned across the bar to give Tim a quick kiss good-bye and then wandered off into the huge gaming area.

The usual chaos of lights and noises surrounded her as she went. After a while, it all blended together into a kind of sensory overload and from there into visual and auditory white noise. For a moment, Marty went adrift in it, losing her way among tables and machines she'd visited off and on for months.

Maybe Tim had slipped something into her Scotch. No, he wouldn't do that. He might ask and cajole to get back into her bed, but he'd never do anything underhanded. Still, something had knocked her off her bearings. Maybe she'd had some kind of reaction to the liquor.

After several seconds, the sensations faded, her mind clearing. She shook herself briefly, turned a corner, and found herself in a part of the club she'd never seen before.

As she glanced around, the feeling of newness grew even more pronounced and for good reason. She'd never visited an X-rated casino -- hadn't even known such a place existed -- but she stood in the middle of one now.
http://www.changelingpress.com/product.php?&upt=book&ubid=1739
Posted by Alice Gaines at 8:00 AM No comments: 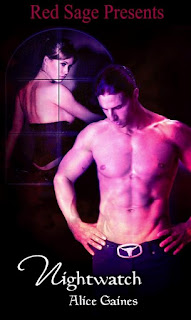 Janice went into the kitchenette and found a bottle of flavored iced tea in the refrigerator, Ann hovering right behind her the whole time. When Janice turned around, she found her sister’s face nearly touching hers.


“Perch somewhere, would you?” she said. “I can’t think with you crowding.”

“Okay.” Ann sat on one of the stools at the serving area of the counter. “Shoot.”

Janice got out two glasses and filled them with ice. “That man…Sam…lives across the courtyard.”

She poured their drinks and sat on the stool across from Ann. The whole thing about watching him had been eating at her. She had to tell someone or she’d go nuts. Her sister might get meddlesome from time to time, but she didn’t blab.

“Absolute, most sacred pledge of secrecy,” she said.

“I mean it,” Janice said. “If you tell, I take your firstborn and sacrifice him to Satan.”

“Come on. You know I don’t repeat things.”

“Not even to Ralph.” Janice didn’t need her brother-in-law looking at her funny at family reunions.

“That man, Sam Windsor.” She took a fortifying drink of her tea. “His bedroom faces mine across the courtyard.”

“Okay.” Ann leaned toward her as if expecting the real story.

“You don’t understand.” Janice set her glass down and rose. “Follow me.”

Janice led her sister into the bedroom and to the window in question. “Look.”

Ann did. “You have a pretty good view.”

“Not only that, but you know about the acoustics out there.”

“A few nights ago, he had a visitor, and he left the window open.”

“He did? Doesn’t he know how sound travels out there?”

“So he had a visitor in his bedroom.”

Janice went to the bed and sank onto it. “A woman…and they were…with the window open and the blinds up.”

“Oh.” Ann stared in that direction again as if something really interesting might happen. “I see.”

“Yeah.” Ann sat next to Janice on the bed.

“They were going at it. Doggie style.” She still had those images in her head. The way he‘d done the nasty with that woman. The expressions on his face the whole time. “I could see everything.”

“I do mean everything.”

Ann fanned herself. “What did you do?”

“I watched.” There, she’d said it. She’d peeped in on a couple making love. Did that make her some kind of pervert?

“I slunk down by the windowsill and watched the whole thing,” Janice said.

“Well, um…” Ann’s face turned red with embarrassment. But then, she’d always blushed easily. “That’s not illegal. At least, I don’t think it is.”

Ann fanned herself. “Oh, my God. And he’s drop-dead gorgeous.”

“Plus, he’s really good with his fingers.” And his mouth. She wouldn’t forget his mouth. “You should have heard the noises she made.”

“Well.” Ann cleared her throat. “I’m sure he’ll keep the blinds down in the future.”

Ann put her hand on Janice’s arm. “You mean you saw more?”

http://http://www.eredsage.com/store/product976.html
Posted by Alice Gaines at 12:33 PM No comments: